You know, for a game I paid $10 for, this is a great title. Having said that, I’ve been something of a fan of the XCOM series. If you don’t like XCOM, you won’t like this. It’s still basically the same thing.

I absolutely love the Breach feature and the various specs and options you get. Every battle begins with some form of breach, from busting through doors and windows, to hacking doors and blowing holes in the wall. Breach is immediately followed by a sort of “bullet time” even where each agent on your team gets to take a shot or other action. Later on you start to unlock special abilities that you can use once per mission during this phase, like scanning the room for an aim bonus or healing everyone at your breach point. They still get to take their shot on top of that.

The order you assign to breach points and the agents in each point will also determine their relative positions in the turn order once combat proper begins. I have someone set up with tranq ammo to finish enemies off non-lethally. I try to put her fairly late in the turn order so I have a wider choice of targets.

Also new is having a variety of non-human agents on your team. In some cases this is more flavor than anything else, but they tend to have abilities consistent with their… species. The human characters don’t seem to suffer though, as everyone has a pretty unique thing that they can do. One of the engineers has a ranged heal while the other has a ranged shock that’s 4 damage and 100% hit chance. I use both of those frequently.

That’s where I imagine some of the more hardcore fans might not like the game. Even on its normal difficulty, it feels slightly less severe and a little more… “arcadey?” By no means is this a complaint, just an observation.

It’s still XCOM, though. It has its usual balance of managing resources, doing research, having to prioritize certain missions or areas simply to contain the chaos; if you know the franchise, you know the drill. Noticeably absent is the base-building/construction element we normally have, at least to the point that I’ve played it.

The loadout is kinda the same. I have yet to reach a point where I can change the weapon any particular agent uses, but not displayed here are the mod slots for weapons and armor. In addition, you get one breach item that can allow that agent to be placed in a certain position. For example, in order to use a certain breach point you may need a “breach charge” and the agent carrying the charge must be in the first slow.

The utility items cover a pretty wide spectrum, from special ammo like I have here, to medkits, and different kinds of grenades. I haven’t got any yet, but I thought the “cease-fire” grenades were cute in an “I’m the man and I’m oppressing you” kind of way.

Thematically your team is more like a superpowered SWAT team than a paramilitary group. A relatively constant concern is avoiding civilian casualties and you get rewarded for non-lethal takedowns. Many of the associated character dialogue actually used the word “arrest.” 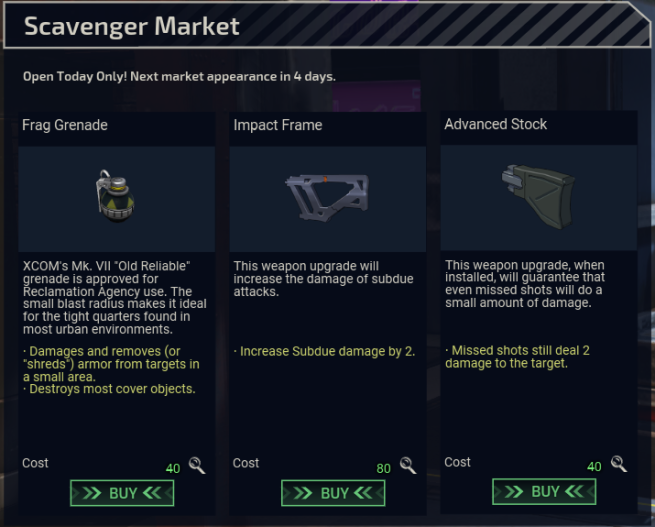 There are a few things like the scavenger market that you unlock by doing a particular mission. It comes around once per week or so and sells three items for “Intel.” This is the same currency you earn for the arrests. So far it’s been mostly equipment mods and utility items. You can be certain I picked up that stock on the right, though I put it on a pistol? Game logic is game logic.

I could say more, but I just wanted to hit the highlights here. I haven’t had as much time to play it as I might have liked, but got more out of it than I expected. With such a low price point, a full suite of the usual XCOM options, and full Steam Workshop support, I suspect we’ll be seeing some paid DLC, both campaigns and features, in the future. I look forward to seeing what they do with it.

Hey, it’s Blapril time! The goal is to simply promote and stimulate the blogging community by encouraging people of all skill levels and backgrounds to post. The official post can be found here and it’s never too late to start.

One thought on “Something New – XCOM: Chimera Squad”