Since I’m rather between games at the moment, I’ve been playing around with random games I’ve either never played before or never really given a fair shake. Maybe this will be a consistent column, maybe not, time will tell. This week I started tinkering with DDO. It’s Syp’s fault, I have to listen to him talk about playing it and decided why not try something new 😛

Now I know it’s been around a minute, but I’ve never tried this one. It released in 2006 and that would be the period of time I didn’t really have a computer or do much gaming, so I guess it makes sense that I missed the boat.

Now, having played pen and paper quite a bit when I was younger, it has a certain allure to it. I tried Neverwinter for around an hour and found it to far from the source material and a little in your face with the cash shop for my tolerance at the time.

This however, steers much closer to the source material. Just close enough that it all feels familiar while actually being infuriatingly different. 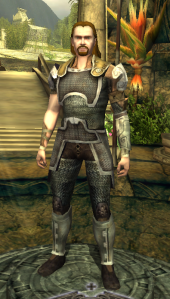 I started by returning to old habits.  Made a paladin, human because figured it was easy enough to sort  out, named Kenidil Lightbringer.  It’s old name from my EverQuest days, one of the ones I’ve been using over and over again.

Now I did the first few quests just sort of following the prompts and stopped at the point where I was supposed to leave town. Honestly, I was confused. I know how skills and feats work on paper, but was having a hard time figuring out what I was doing in the game. I was looking at this enhancement thing I didn’t know anything about and made some choices in character creation but never picked any actual skills or feats.

I took a time out and did some reading. After an hour or so poking around on a wiki I managed to piece together what was going on and get myself going. I logged back in and left Korthos Village.

I mainly wandered around and killed sahaugin and cultist for a while, generally exploring the area. I did do some sort of dungeon with an ice puzzle at the end, but like a derp I didn’t take any screenshots.

At one point I was beginning to get bored because I couldn’t find anything else that it would let me do, so I went for a swim in the river.

And killed more sahaugin, “yay.” Starting to feel like genocide at this point.

I’ll admit, wandering around had it’s advantages. Especially once I figured out how to turn the UI off and had to find this spot a second time.

Around this time I was getting mildly annoyed.  I had wandered around and found a couple of dungeons I couldn’t do because I apparently didn’t have the required quests, so I checked the quest log.

Go find Ursa it said. Well I did. As I had apparently done before. Talking to her doesn’t actually update this quest prompt.

I found the quests for the other two dungeons though, so I’m probably going to try and do those at some point.

It’s not a bad game overall. It hits a nice middle ground between guidance and freeroam. It’s honestly probably more fun with people than it is solo, but alas, my coworker hadn’t joined me yet, he was patching. I’m not sold on it yet, but I’m not ready to bail quite yet either.

May all your strikes be vorpal.