Okay, so they had this bit at the beginning of the call and I feel compelled to mention it here as well. All of this is what’s called a “forward looking statement” and isn’t in any way guaranteed. It’s true to the best of their knowledge, but they can’t predict the future so it might change. All these slides are screenshots directly from their presentation.

I never realized it was possible to be bored and interested in something at the same time. That’s a pretty good way to describe the earnings call though. I was interested to hear what they had to say, but the actual nuts and bolts of it is pretty dry and boring. It’s also worth pointing out that I didn’t have any intention of sitting in, but I got an app notification while I was making dinner that said “tap here to listen in” and I was like “oh, sure, sounds like a plan.” So I was attempting to make and serve dinner and get other things done during this call, so my notes were kinda spotty, especially at the beginning.

The overview of 2018 is actually mildly positive. Overall revenue is up compared to 2017 and actually beat the existing outlook for 2018. That’s actually pretty good news for a company that’s been struggling lately. I personally would have expected them to miss target. They did have some major releases for 2018 though, like Battle for Azeroth, so I’m sure that helped. 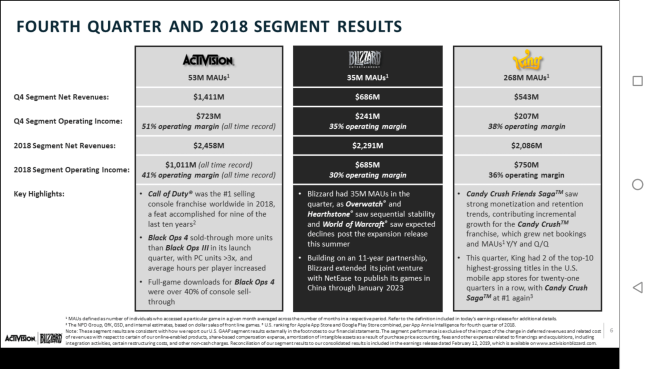 Overall, though, most of their net revenue is coming from Activision. Call of Duty has continued to perform well for them, and PC sales of Black Ops 4 are really strong. Something else mentioned is that they’re seeing an increase in digital sales across platforms as well.

Blizzard is the black sheep of the family. Their major performers are the obvious one, Overwatch, Hearthstone, and WoW. I could have sworn I heard them say all three were experiencing “sequential decline” but that’s somewhat in conflict with the information presented in the slide. I felt this was pretty obvious for was WoW though, and it does specifically say “expected declines” there.

As for King, apparently Candy Crush Friends Saga, whatever that is, is performing well and is expected to continue doing so. Most of what they had to say is that it’s showing signs of nearing a full recovery from some network issues in Q2. Not sure what those issues were and I’m not intending to look or get into it here. 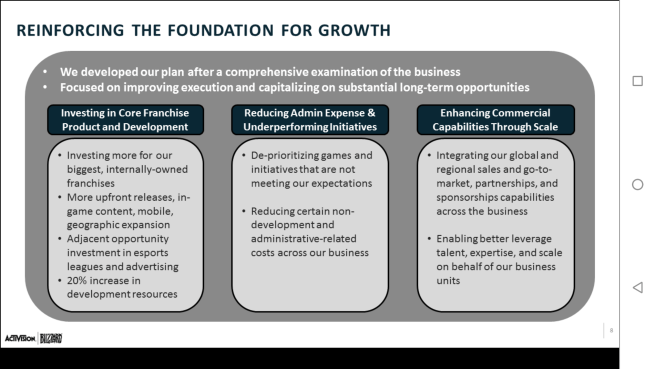 Going forward, they outright said that 2019 is going to be down year over year. The only thing I heard them talk about for Activision was CoD 4. It’s apparently revolutionary and everyone is excited about it. For their sake I hope that’s true, but from where I sit CoD is CoD.

The big thing that’s been in the news is the “reducing certain non-developmental and administrative-related ‘costs.'” I realize this is more than layoff, but this is also layoffs. They specifically said they wanted to increase development talent and resources and that this is how they’d planned to, ah, make room. The bit that’s probably most concerning to games is the “de-prioritizing games and initiatives that are not meeting our expectations.”

They did discuss the situation with Bungie and Destiny in the Q&A section. It was a mutual decision driven by three majors factors. It was allegedly the outlier in that they didn’t fully own the Destiny IP, it’s revenue wasn’t really performing as well as they’d hoped, and it was tying up some of those pesky development resources and they wanted them back.

Blizzard itself has a pretty dismal outlook, with no major projects slated for release in 2019. None. I’m not sure if Diablo Immortal is considered a “Blizzard” product or not, because where it and CoD Mobile are concerned they “have no additional announcements at this time.” We do know they’re working on Diablo 4 among “several Diablo projects.” They also plan to devote some more resources to Overwatch, as its season 2 League starts… tomorrow, I guess? If they offered anything specific about Hearthstone I must have missed it. 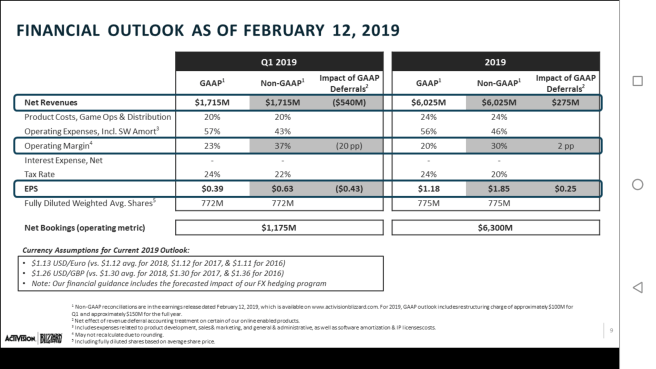 So the outlook for 2019 at Activision Blizzard is harsh. Revenue is shown down by about 1.5B and earnings per share are about half of 2018. It really makes sense given the layout though. Activision is riding on CoD 4, which I believe is more of an autumn release, Blizzard has basically nothing, and King is… doing whatever it is that King does. It’s just not going to be a income heavy year, which is somewhat expected when major releases have a multi-year development cycle.

This is why micro-transactions and subscriptions are a thing. It provides revenue from existing titles while new ones are developed. I’m not saying it’s always a good thing, but surely we can meet them halfway and not complain to much about reasonable monetization, whatever that may be.

Overall they seem to be doing okay, they’re currently up around $1/share in premarket trading so I’d say most people are pleased with and/or okay with the results. I’m personally indifferent, but this may be a good year to consider buying some stock if you’re in the market. I dunno, maybe shouldn’t listen to me, as that’s pure speculation on my part.

Y’all take care, and congratulations to anything that managed to get through all that without falling asleep.