It’s funny, in a way, that it’s taken me this long to write about Elite. More than a little test guide I wrote a while back to wrap my head around the idea of a guide anyway.

I was not aware of it’s existence until this iteration, but Elite has been around for a long time. It’s earliest incarnation is barely younger than me, having been released in September of 1984. It was released on quite a few different platforms and feature primarily wireframe graphics. Core gameplay was, and is, an open-world sandbox that revolved around trade. 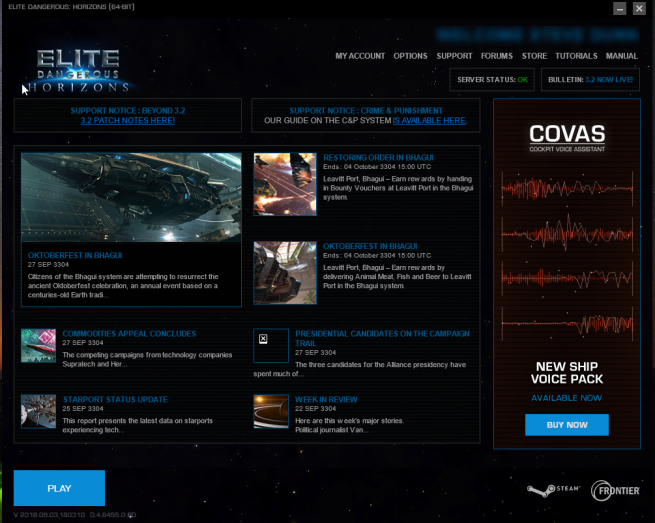 The newest entry fancies itself more of an MMO type of experience, complete with a cute little launcher that provides a variety of news articles about the ongoing universe, a couple of patch note links, and a banner ad on the right to hopefully convince you to buy some cosmetics. I won’t really get into that here, but it’s exclusively cosmetic/customization items in the cash shop. It’s also purchased with actual currency, none of that silly virtual currency business. 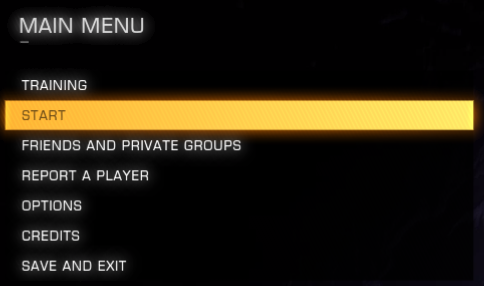 The game itself is as much simulation as it is game. The detail that goes into the different ships, the different sounds they make, the fine details of maneuvering and landing, give it a very flight sim sort of feel. Like seriously, you need a joystick unless you’re some sort of mouse and keyboard prodigy. One with buttons, lots of them. Mine has 12 buttons, 3 axis stick, and a little hat and throttle, and that allows me to get most basic ship functions on the joystick itself. 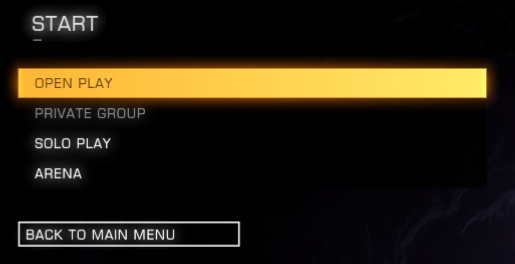 In reality Elite is only as multiplayer as you want it to be. I personally choose to play in Open, but honestly human pilots are pretty rare unless you’re engaging in current even content. My experience with other humans has been very mixed so far. I had a “lol noob your not worth my time” sort of experience once before and much more recently a “sorry it’s just business” sort of encounter when a player from an opposing faction dropped in on the home system and fried me with a hold full of goods. Honestly the vast majority of people don’t interact and if you’re in transit you may not be in the system long enough to notice. Any time I take a break from the game for a while I always make a point to engage my pre-flight checks. This simply makes sure that I have access to basic functions like throttle and landing gear and know how to access them. Once you launch you have to exit the station and request a landing pad in order to return. Failure to do so will likely result in the loss of the ship. 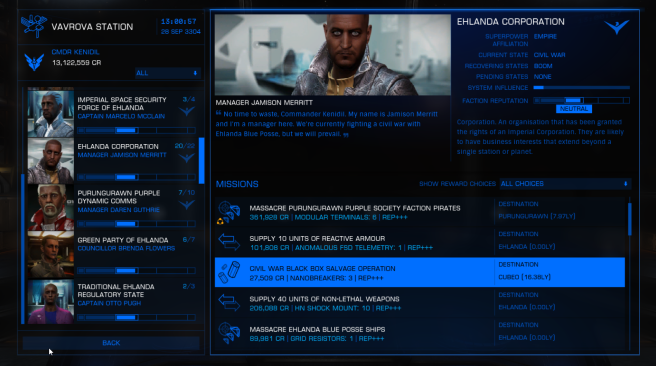 I loaded in on my cargo ship and wanted to go back to the home station where my ships are stored. I figured I might as well try to land a cargo contract but the only one for my destination was a salvage operation, which is a more exploration type of activity that this ship isn’t set up for.

With that out of the way I went ahead and launched myself. Nobody wants to sit in station all day.

One of the things I like about Elite is how immersive it tries to be. The ship has an audio assistant and provides feedback about several things going on. Each station has also a flight traffic controller that refers to you by a callsign when you enter range and announcing your landing pad when you request one and all that. While not exactly unique to you, your callsign is your ship manufacturer and the first three letters of your pilot name in the phonetic alphabet. For example, the Keelback that I’m flying is made my Lakon Spaceways and my pilot name is Kenidil. My callsign while using this ship is Lakon Kilo Echo November.

Now I’m under the impression that they try to stay vaguely in the realm of reality, with regards to astronomy anyway, but reality would make travelling between different solar systems really really boring. As a result they have the “frame shift drive.” Now, I’m not a lore expert exactly, but it’s some manner of alternate dimension they enter and use the FSD itself to compress/move the space around the ship instead of moving the ship itself. I dunno, whatever, the experience is cool though. 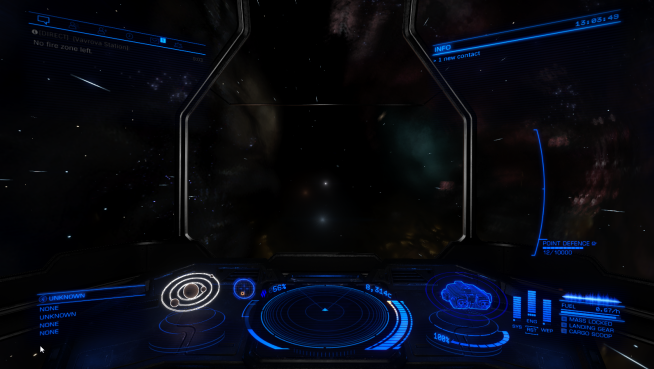 That bright dot in the center is the destination star. I’ve always assumed it had something to do with stars being easier to see at these distances and more mass to lock on to. Which naturally is why you always drop out right next to the dang thing. Don’t AFK and Drive guys, that’s how people get killed. Trying to grab a bite to eat while making a jump is a good way to end up biting it. Been there, done that, didn’t enjoy it. The t-shirt burned up in the explosion. 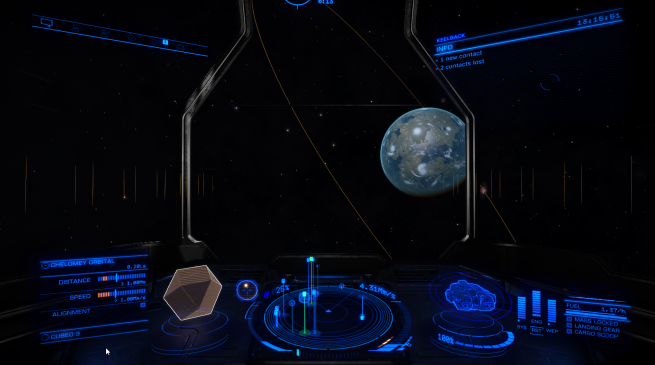 I wish we could land on this type of planet so bad. Unfortunately as of yet we’ve got mostly boring dirt balls that look like the moon. Ship outfitting is fairly complicated in the details but the big picture isn’t to hard to grasp. Each ship has a certain number of slots of a designated size. Within each size there are usually five grades E-A in order of cost. There are exceptions, like cargo racks, because it’s kinda hard to improve “empty space.” A is not always the best choice either. Class A parts tend to have the best “performance” but are obnoxiously expensive and typically draw a lot of power. Class B is usually a good high end choice with a nicer price, but has the highest mass. Class C is a balanced mid tier. Class D, which I use a lot, is barely better than Class E but is usually the lightest class. For something like an exploration ship where you’re trying to minimize mass to get maximum jump range class D is where it’s at.

For the record, that isn’t my Keelback in the picture above, it’s my combat outfitted Vulture. The ship you see in my as my user image with the glowy blue lines. My keelback is basically cargo racks all the way down. 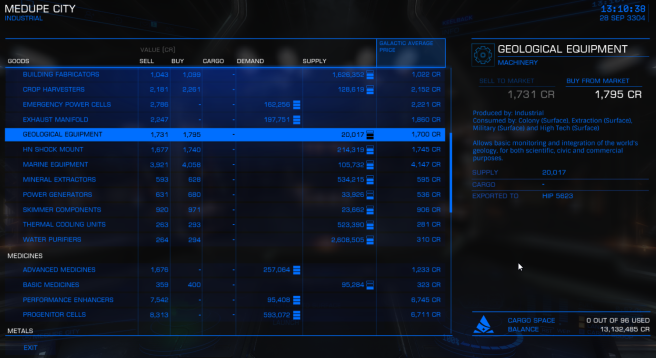 Speaking of cargo racks, I honestly make most of my money doing cargo missions mixed with the odd trading run here and there. There’s a large background simulator that has every system/station assigned an economy that controls what is produces and what it needs. Trading is a rather tight balancing act of finding a system with a massive supply selling below the galactic average and taking to somewhere where it’s in high demand and selling above the galactic average. I honestly haven’t had a ton of luck, but that’s partially because my Keelback is like a space U-haul, not really a good cargo runner but it’s better than a plain ol’ truck. 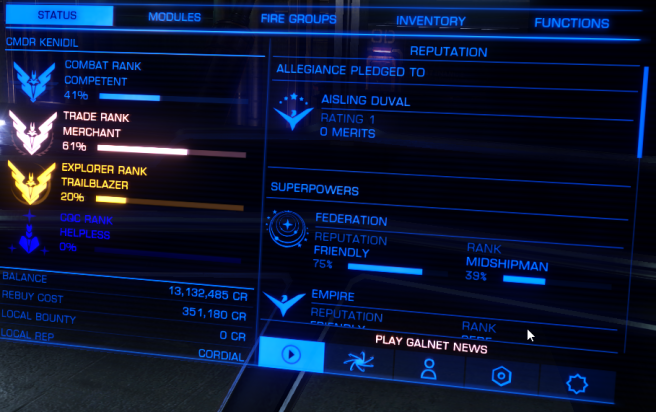 The game does give you a rank in various types of activity that are an okay indicator of your level of experience with that activity. My combat rank was mostly harmless for quite some time. You can make good money doing any of these things, really, but it helps to pick a location and hang out there. You don’t get the good paying missions until you’ve increased your faction standing in a system by doing the little ones. I actually got my initial working cash by doing smuggling missions. Little on the high risk side especially since I didn’t know what I was doing, but I managed to get a decent ship and started branching out a little. I currently have three different ships, one for each one of those activities.

Now, all that aside, the main flaw I’d say this game has is that it’s 100% sandbox. There’s absolutely no story other than the one you make for yourself. This creates a vague unguided experience that can honestly seem rather humdrum, especially if you don’t read the news and immerse yourself in the sim itself. There are some things I would love to do but haven’t managed yet, like making the trip to Colonia. Even my exploration ship doesn’t have the kind of jump range I would need on it yet. That and playing in a group with my brother would require me to return afterwards and it’s such a long trip that it would be inconvenient.

It’s not for everyone. Even I don’t tend to play for long periods of time but in a more on again, off again way. It feels more active and engaging than, say, EVE. I’ve played EVE too, but I dislike the sort of auto-piloty nature of it. It feels too cold and distant, like a spreadsheet in space that’s been cleaned up and made prettier. So many spreadsheets….

Some days, even I don't know what I am anymore. I have a variety of posts about myself that can be found here: https://unidentifiedsignalsource.wordpress.com/category/about/ View all posts by SDWeasel